Focusing on our 2014 conference theme, The Rise of the Commons: Investing in a Socially Sustainable Community, we asked Adam Werbach, Co-Founder of yerdle and GoGreen Portland 2014 Keynote, to tell us how his company is driving the sharing economy and producing positive social impacts. Check out what we learned (and get excited for his Keynote!) below. 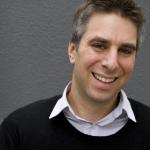 nference: The sharing economy is still a relatively new concept that many people do not fully understand. How would you define “sharing economy” to someone unfamiliar with the term?

Adam Werbach: With sharing economy there are activities that take underutilized resources bringing them to use through the application of technology and community.

GoGreen Conference: How does the model of yerdle play into the sharing economy?

The idea of sharing items is nothing new. It’s how humanity has gone through hard times, has supported friends and family, it’s how we put together picnics, sports teams and crafts forever. Only in the last fifty years have we started having to buy something new and disposable. What sharing economy provides is an opportunity to return to the types of behaviors that have helped us survive forever.

It’s less packaging, transportation, mining, oil etc. As an example I just got a camping coffee pot for free from yerdle from someone in Virginia. If I would have bought a new one the aluminum would have came from Australia, it would have been made from bauxite to aluminum in a large plant, shipped to China to be fabricated, shipped to Hong Kong to be packaged, shipped to the Midwest to be put into storage and then shipped to San Francisco for me to open it.  After that I would throw all the packaging away which would end up going into a landfill.

GoGreen Conference: According to Forbes, the revenue that flows through the sharing economy was an estimated $3.5 billion in 2013 and was projected to grow 25% this year. What is your prediction for 2014? Have you seen this type of growth in yerdle’s communities?

AW: I think the idea of the sharing economy is going to affect Americans pocket books in a way greater than almost any economic movement we’ve seen since probably the start of social security. This will mean real wages increasing for Americans. There will be two things. One is a student and moms with young children will be able to pick up flexible work to match their schedules. Secondly services like yerdle will start causing people to have to spend less money, which will in fact increase the power of wages. We’re out to decrease cost of durable goods by 25 percent, which many of our members have done already. Today 25,000 items a month are moved on yerdle.  In January the number was closer 1,000 items a month. It’s a pretty obvious idea if you have something in your garage that you’re not going to use why won’t you put it up and see what you can turn it into? It feels good getting rid of unused items and giving them to someone who would benefit from them.

GoGreen Conference:  There are many positive economic impacts to the sharing economy – what are some of the social impacts that occur?

AW: The biggest social impacts are individual. People are able to get their lives in order by entering a community of people who are all interested in the same things as them. I can give a few examples of stories of people helping teachers get their classrooms settled, new moms who have been left by their husbands trying to make ends meet or people trying to get to burning man and figuring out a way to do that. The broadest social impact from an ecological standpoint is the radical reduction of waste. The 25,000 items from this month are things that wouldn’t have needed to have been produced and would have been produced and bought online and shipped and packaged and manufactured. That’s kind of the most obvious piece however the community ones are the ones that I think feel the best.

GoGreen Conference: Do you see any age trends in those using the peer-to-peer market? Is there an average age bracket for yerdle users?

AW: It tends to see a little bit younger crowds.  Eighteen to thirty four is the demographic but late millennial are the quickest to adopt. We are mostly in apps so people with IPhones and Androids tend to be the ones using. It’s both young people trying to put things together who are not as stuff oriented and then young moms trying to get together the things they need.

GoGreen Conference: What are you hoping your audience will walk away with and gain from your keynote address at GoGreen?

AW: If you believe like I do that we are not efficiently using all the greatest resources on the planet and the greatest one being people. Think about what’s being wasted right now in your home, office and among your friends. Discover the blank paper, how would we engage them? How would we take those lonely hours and turn them into productive activity? How would we take those items that are stuffed into the back of your closet and make them actually produce something that we actually want? How would we make sure that car sitting in the back of your garage is actually used? My grandmother always taught me wasting is almost a crime. How do we take that seriously? Just because we can afford to have new items doesn’t mean we should.