Fighting Not Drowning: The Youth Who are Leading the Climate Revolution

Fighting not drowning.
As the seas rise, so do we.

These are just a few of the rally cries that were heard on Friday, September 20th, 2019 as youth across the globe organized and gathered for the Global Climate Strike. There were 4482 strikes registered globally, with over 1000 of them taking place in the United States. Portland’s strike began Friday morning with a youth-led rally outside City Hall where groups spoke of the destruction to Frontline Communities dealing with the harshest repercussions of climate change despite doing the least to aggravate it, called for the adoption of a Green New Deal phasing out fossil fuel infrastructure and investing in renewable energy, and demanded climate justice.

Youth from all backgrounds, some representing the Pacific Islands and Indigenous tribes, some with plans to run for congress, led the rally. Speaker after speaker stood in front their peers and they shared their call for action – a cry for justice. With these speeches in mind, tens of thousands of Oregonians marched across Hawthorne bridge. At its height, the march spanned nearly a mile, filled with protesters.

With globally known young leaders like Greta Thunberg (16) and Jamie Margolin (17) speaking for the voices of the youth to be heard, the movement for climate action is a largely youth led initiative. Young people across the world are fighting for their right to an inhabitable planet long after those who contributed most to climate change are gone. 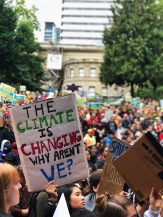 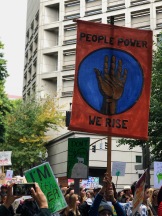 Just last Wednesday, Thunberg and Margolin testified in front of congress in the panel: Voices Leading the Next Generation on the Global Climate Crisis. “The reality is, my generation has been committed to a planet that is collapsing” Margolin emphasize in her testimony, “On college applications I keep getting asked what I want to be when I grow up; the media, pop culture, politicians, businesses, and the whole world tells me that I and my whole generation will have something to look forward to that we just don’t.”

Margolin ended her testimony with a call for action on behalf of the youth. Her dialogue came to a close with the declaration of her generation, Generation Z as the era of the Green New Deal, a congressional resolution that lays out a grand plan for tackling climate change.  “People call my generation, Generation Z, as if we are the last generation. But we are not. We are refusing to be the last letter of the alphabet.”

In the wake of the week long Global Climate Strike, we are all the more thrilled to welcome This is Zero Hour founder Jamie Margolin to the podium at our GoGreen Conference in Seattle April 9, 2020.  For ten years, the GoGreen Conference has been the ultimate sustainability learning experience for business and public sector decision-makers in the Pacific Northwest. Featuring regionally targeted content and recognized leaders from the community, GoGreen works across industry silos to foster peer-to-peer learning and collaborative solutions.

This entry was posted in Uncategorized. Bookmark the permalink.